We’ve all experienced the high pitched screams, rolled our eyes and sighed aloud before reaching for the volume button on the entertainment system. Now that I’ve been that parent and I am a parent, it’s a completely different experience. Read my Flying With A Baby Beginners Guide for advice on booking the right flight, navigating airports and feeding in the air.

The first time you fly with your baby you are an emotional wreck. I had such bad anxiety I didn’t sleep the night before and I was in tears on the shuttle-bus to the airport. Why? I was terrified that something bad would happen to the plane and therefore to George. I felt like I was a bad mother for potentially putting my son in danger. But after a smooth first flight that fear has gone. Surprise surprise, nothing bad happened at all.

By the time George had reached the tender age of 14 weeks old, he had five flights under his belt – two long haul and three short haul. So when it comes to flying with a 3 month old baby we have learnt and adapted through trial and error, creating a routine that works for us. When I say work, what I actually mean is that when George becomes upset we are ready to help him.

“Why are they crying?” the million dollar question.

Every parent asks themselves this question at least ten times a day, every day. So why would the scenario be different just because you are on a plane?

Our first flight was 12.5 hours long from Manchester to Singapore and George was 12 weeks old. We set off at 11am and fed him during take off, because that is his normal feed time. Once we were in the air, we stuck to our normal routine.

He didn’t cry once – I was relieved. The second flight was a short 1.5 hours from Singapore to Vietnam and he slept through the whole journey. Third flight, same same. He slept for the 2.5 hour flight from Ho Chi Minh to Da Nang. The fourth flight was our first experience of an upset baby on a flight.

We arrived at the airport early and found a restaurant to have some food. The 3.5 hour flight to Singapore was due to take off at 11.50am. We fed George at 10.30am and then all of a sudden, we heard an announcement over the tannoy. Our flight was boarding now.

Within half an hour George was really upset. He wasn’t crying, he was screaming. It is difficult to express with words but you feel a combination of sympathy, confusion, awkwardness, frustration and guilt.

Sympathy for your baby. Confusion because you don’t understand why they have gone from smiling to screaming in o.1 seconds. Awkwardness because you’re breaking the unspoken plane etiquette. Frustration as your baby can’t communicate and tell you how to help them. And guilt – “We should never have done this.”

Fast forward 10 minutes (but felt like an eternity) and George is smiling again and playing with the man sat across from us. I cried and we spent the next hour discussing and reflecting on what we thought had upset him.

Turned out he needed to burp. Because we were rushing we didn’t keep him upright or burp him for long enough. He cried again as we prepared to land because of the air pressure and ear popping. For this flight the error was ours.

For our fifth flight we were already expecting the worst. The only flights departing from Singapore directly to Manchester are at 2am AND are 14.5 hours long…We had decided that we were going to stick to Singapore time and stick to the routine. Our aim was to let him sleep as long as he wanted. When we landed, hoping he would automatically ‘reset himself’ as it would be 8am UK time.

He lasted 12 hours. Then he became as fed up as every single person on the plane. The only difference was that George vocalised his boredom with his incredibly strong and loud vocal cords! But we were ready. And whisked him off to the back of the plane. Babies love to hang out with air hostess’, who calmly distract them with smiles and cuddles.

For the final couple of hours we threw the routine out of the window and played with him, walking up and down the aisles, sang to him. Anything to keep him engaged and busy. We weren’t the only parents on board the plane with a new baby, there were two other couples in the same position as us. And we all took turns in allowing our precious ones some ‘vocal time’ during the flight.

What did we learn from the experience? That 14.5 hours is too long for us and for a baby. Remaining calm (despite the spike of adrenaline that rushes through you when your baby cries) or at least trying, helps you to think clearly and not panic. Crying is natural and everyone on that plane was a baby once. When George cried the second time, I didn’t feel obliged to “shut my son up.”

Instead my thinking was, “how can I help you?”

It’s certainly a challenging time and a genuine concern for parents when they are considering travel with a baby. Do not let it be the determining factor. It’s like childbirth – it hurts but you know it will end eventually so you dig deep and get through it! 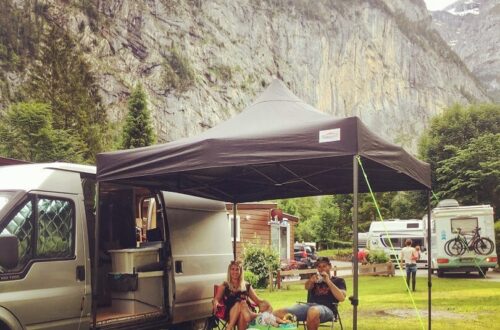 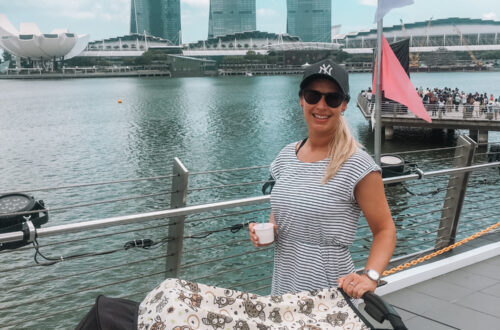 THINGS TO DO IN SINGAPORE WITH A BABY 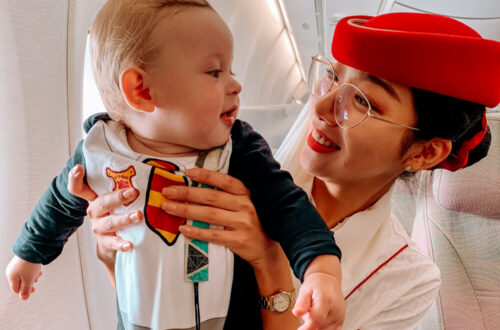 6 THINGS YOU NEED TO KNOW WHEN FLYING WITH A BABY!