Few places on Earth look more like storybook illustrations than Neuschwanstein Castle. With its towers, turrets, frescoes, and throne hall, it looks like it was plucked straight from your favourite fairy tale. And it is. Walt Disney visited the castle with his wife, and was so inspired it became the castle in Cinderella, along with the castle that features in the title credits of every Disney movie. But the story behind this over-the-top palace nestled in the Bavarian Alps is less idyllic.

King Ludwig II of Bavaria commissioned the cliffside castle in 1868 after losing his rule during the Austro-Prussian War. He quickly retreated into a private fantasy world, surrounding himself with opulent castles where he could live out his dreams of being a true, sovereign king. But he died before the final towers were completed in 1892. Within weeks of his sudden and mysterious death, the magnificent castle was opened to the public, where it quickly became one of the region’s most visited attractions.

More than a century ago “Mad King” Ludwig II of Bavaria was declared insane, deposed and three days later his corpse was found floating in a lake south of Munich. The real cause of King Ludwig’s death has been a mystery ever since his body, together with that of his psychiatrist, was dragged from Lake Starnberg on 13 June, 1886. But the official version, which holds that he committed suicide by drowning, has never been completely refuted. Will they ever discover the truth?

Open all seasons and for the majority of the year, the time you visit will depend on your availability. Most visitors arrive between July and September (school holidays), so that during this time you can expect considerable waiting times. It is also possible that all the available entrance tickets will already have been sold by lunchtime. SO book in advance for you guided tour tickets. Best time to visit? April – June. Clear skies and good weather will provide you will with stunning views of the castle and the surrounding countryside. To get to the top of the hill you can either walk, catch a bus or enjoy a horse and carriage ride. The weather and time of your visit (winder vs summer) may minimise your options and views.

Neuschwanstein Castle can be located on a rugged hill above the village of Hohenschwangau near Füssen in southwest Bavaria, Germany. It lies at an elevation of 800 m (2,620 ft). Its surroundings are characterised by the transition between the Alpine foothills in the south (toward the nearby Austrian border) and a hilly landscape to the north.

BY CAR OR COACH: Take the A7 motorway (direction Ulm-Kempten-Füssen) until the end. From Füssen follow the B17 road to Schwangau, then follow the signs to Hohenschwangau. Alternatively, take the A7 motorway until the Kempten Kempten and then the B12 road to Marktoberdorf. Follow the B16 road to Roßhaupten – OAL I to Buching – and then take the B17 to Schwangau and Hohenschwangau.

BY PUBLIC TRANSPORT: With over 6,000 people visiting every day in peak season, public transport is efficient and affordable. Take the train (www.bahn.com) to Füssen, then the bus to Neuschwanstein (stop “Hohenschwangau Neuschwanstein Castles, Schwangau”). You can catch a bus, (www.rvo-bus.de). Coaches regularly make the trip to the Castle via intercity bus lines to Neuschwanstein  with tickets available for as little as £4.99.

You can walk up to the castle and around the grounds for free. If you wish to enter the castle, you will need to purchase tickets well in advance. During peak season (summer) up to 6,000 people can visit every day. The guided tour lasts around 30 minutes and only happen at scheduled times per day. So if you do not book in advance, there is a strong chance you will not be able to enter the building.

The guided tours are delivered in German and English by our expert guides. Visitors who do not speak one of these languages, can use an audio guide. Available in Japanese, French, Spanish, Italian, Czech, Slovenian, Russian, Polish, Chinese (Mandarin), Portuguese, Hungarian, Greek, Dutch, Korean, Thai, Arabic and Hebrew.

Neuschwanstein Castle is situated near Schwangau and Füssen in the Allgäu. The path to the castle starts in the village of Hohenschwangau, and this is also your last opportunity to park. Parking costs € 7 for the day. Cash only, a member of staff will approach your vehicle when you pull in to the car park. There are 3 car parks to choose from.

If walking up the hill, you will find a restaurant, cafe and food truck on the way up/down. There are also plenty of benches under the shade, for you to sit, drink and take a rest. We also found a little shop to get a cold drink. When you reach the base of the castle, there is a souvenir shop, toilets and another little shop with cold drinks.

Once inside the castle, a cafe can be found on the second floor. Or of you can wait, there are several eateries at the bottom of the hill in the village. Most places sell traditional German food (sausage) so be prepared! Prices are slightly on the expensive side but the beer is good.

At the base of the castle in the village, there are several shops and restaurants with nappy change facilities. Most expect you to leave a € 0.50 for use (you don’t have to). There are toilets at the top of the hill, which are accessible to anyone (non-ticket holders) but they do not have a nappy change table or area to lay a baby on. We walked up the hill and the restaurant, which is within a 5 minute walk from the castle , has an excellent nappy change station within the disabled toilet.

Cars and bicycles are not allowed on the steep road to get to the castle. If you are a cyclist, please use the cycle path that branches off to the right after about 100m (signposted).

The buses do not run if there is snow or ice on the roads, so be sure to check the weather before visiting.

Strollers are NOT allowed inside the actual castle. There is a pram park located a few minutes from the entrance (once you have made your way up the hill). You can lock up your stroller and any belongings you do not want to take inside with you.

Rucksacks, prams, child carriers, and similar bulky objects may not be taken into the castle.

No photographing or filming is allowed in the castle. Photo and film shootings are basically subject to approval and charges.

Animals are not permitted in the castle.

Neuschwanstein Castle is on the edge of the Ammergebirge nature reserve; it is therefore not permitted to fly model planes or drones /multicopters.

Preserving all the features of Neuschwanstein Castle intact is an ongoing task. Therefore, restoration work and restoration investigations are currently taking place. Might affect your pictures!

We walked up to the castle, taking turns pushing the stroller up the hill. Despite the incline, the walk is achievable for people of all ages. There are plenty of benches, the path is smooth and wide and every 5 minutes there are benches for visitors to use. You can find drink stalls on the way also, if you need a cold drink but no toilets until you reach the top (or the restaurant near the top) so be sure to go before you begin the climb.

There are several viewing points for the castle located around the ground, accessible for free. A viewing platform has been created that overhangs the cliff, but don’t look down as it is see through! This creates a wonderful photograph. Opposite this platform is the uninterrupted view across Germany, which is not to be missed.

Inside the castle you can see the apartments and state rooms of the King, which are located on the third and fourth floors. Unfortunately, the rooms on the second floor were never finished and today house a shop, a cafeteria and a multimedia room for visitors. There are 14 rooms in total, and the tour begins in the Lower Hall. The Hall is covered in beautiful elaborate paintings and every room is as extravagant as the exterior. Unfortunately, they do not allow photos or filming inside the castle.

The best view of the castle is free of charge, and can be seen from a wire bridge. If you are scared of heights, this is not for you! It can be reached by foot or you can catch the bus to the base of the bridge, where the walk to the top is minimal. Be aware it gets very busy and isn’t that wide, so we left our stroller to one side, before stepping onto the bridge. On your way to this point, there is a great viewpoint of Germany and you can see the car park etc.

You can walk across the bridge and continue walking to an even higher point, if you wish. There are several signposts around the castle grounds but none of them specifically say “the bridge.” When stood in front of the castle, turn right and follow the path down. You will then pass the side of the castle and be in a dip, before beginning the climb up the long winding road! But the views are so worth it. 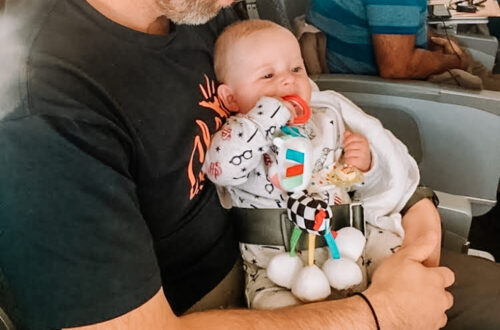 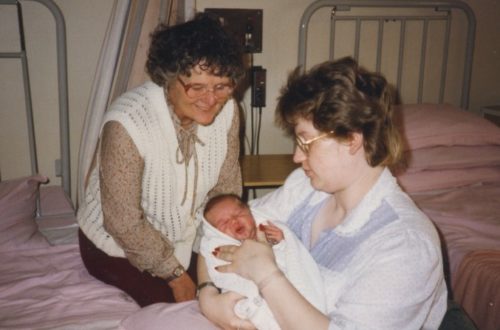 A LOVE LETTER TO MY MUM

BABY BRAIN IS FOR LIFE, NOT JUST PREGNANCY!