When we revealed we were expecting a baby to my now, Mother-in-law, she burst into tears. As the big 7-0 approached and both her children had flown the nest, she was ready to become a Grandma. Thank goodness for technology because we currently live in the UK and my fiancés family live in New Zealand. Literally, you couldn’t get further away if you tried (not that we tried!) but we rely heavily on technology to keep in contact.

I met Nathan in America and after a 3 month stint travelling around SE Asia, we headed to New Zealand and made a base there. Initially we lived with his parents, before I secured a job downtown and we got an apartment in Auckland CBD. His family were friendly and welcoming and, I naturally got on well with his parents, which is what you want when you are over 11,000 miles away from everyone you know and love.

So when we announced that we would be heading for the UK to start a business and for me, to return to education to train as a teacher, his family were sad to see us go. We were sad yet excited, about the future and where this path could take us. In those five years, both parents have been to visit us in the UK and we have enjoyed family holidays once a year, where we try to meet in a location half way between NZ and the UK.

Why haven’t we gone back to NZ to visit them? Because of my job. Frustratingly, as a teacher the holidays limits us and during the summer holidays, we’re travelling up and down the UK trying to grow the business. Up until this year we have been stuck within the restraints of the school system, hence the reason when I was maternity leave, we jumped at the chance to travel as much as we could.

Maintaining or building a relationship with such a distance requires dedication. We set up Facebook messenger groups and try to FaceTime or Skype one a month. Sometimes with naps and time difference, we miss each other. At Christmas we purchased almost 20 customisedcalenders featuring photographs of George with family and friends, he met in his first year of life. We produced and mailed, home-made cards with George’s hands and feet. Send videos and pictures on WhatsApp.

But sometimes you forget or life gets in the way (I don’t know what day it is half of the time). Or you send things to one set of grandparents and forget about the others. I try to have a regular day or time during the week, where I just bombard and offload pictures and videos, accompanied by a written update so they can share in the joy of watching my son grow and flourish.

We want everyone to feel included, important and valued.

In the beginning, you take so many pictures. I can remember having to transfer pictures from my phone to the laptop several times within those first 3 months. Maybe after the first 6 months, the pictures slow down as the running of day to day becomes more demanding. You may return to work (and no time at all) or your baby is beginning to crawl and therefore you can’t take your eyes off them for a second! Either way, I would receive gentle reminders from my brother and mother-in-law that it had been a while since their last ‘George fix’ and quickly fire over some pictures.

I can only imagine how much love and desire grandparents feel to hold and be with their grandchild. As a parent it is natural for me to constantly cuddle, touch and kiss George. Repeatedly, probably a thousand times a day, to the point he runs away from me because he wants no more! Not being able to fulfill these natural yearnings must be tough and I am coming to empathise and perhaps relate and therefore, bond in a different way with my own mother and mother-in-law.

Parenting is isolating and at times, competitive and I have found loyal supporters in my mother and mother-in-law. I feel that I can be honest with the challenges I experience with being a mother. The difficulty in working and trying to parent. My disappointment at not getting things right the first time. The struggle or work, parenting and running a household. The emotional rollarcoaster of life! Now I’ve joined the ‘mum club’ my admiration and respect for them both has increased and they are now my allies.

I understand what it means to love a child. To experience the pure, unadulterated joy when they wrap their arms around you or run to you with a smile on their face. Even though George is mine, I have to share him with others. Let them bask in the euphoria because they grow so fast and they are missing out on so much. Not through their own choice, but through mine. If it was up to them, they would see George all day, everyday.

So to overcome the twinges of guilt when you end the phonecall or, see the tears fall down their face as you wave goodbye at the airport, we owe it to them to keep them as informed and included as much as possible.

These are the people who truly support your mission in trying to be the best parents you can be. Unconditional love for you and your children, despite the many mistakes you will mark along the way. They understand the tiredness, exhaustion and strain, parenting takes on you mentally and physically.  Advice, compassion and the ability to listen because they have the time, because they care, because they want the best for you.

One day I will be a grandparent. If George is anything like his parents, travelling will be in his nature and I will experience the hardship of being a grandparent from a distance. It is a true test of a person’s character, that despite the pain it must cause them to not be as involved in their Grandchild’s life, that they remain positive, supportive and encouraging.

We are lucky to have such wonderful role models and people in our lives who love us, and our son.

Click here for my top tips on helping grand parents feel involved from a distance. 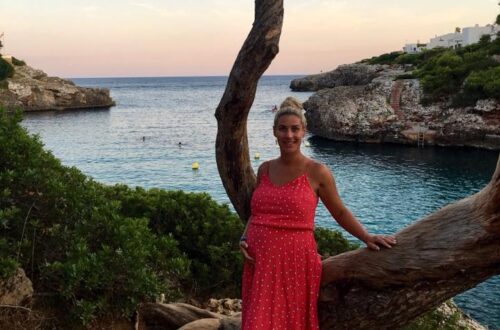 HOW TO TRAVEL WHEN PREGNANT 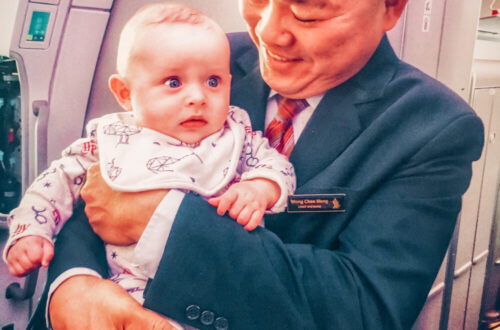 BABY TRAVEL CHECKLIST: WHAT TO PACK WHEN FLYING WITH BABY 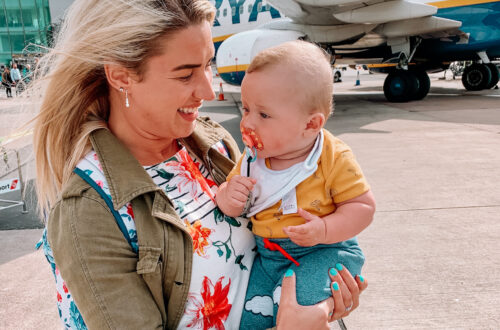 HOW TO FLY WITH A BABY