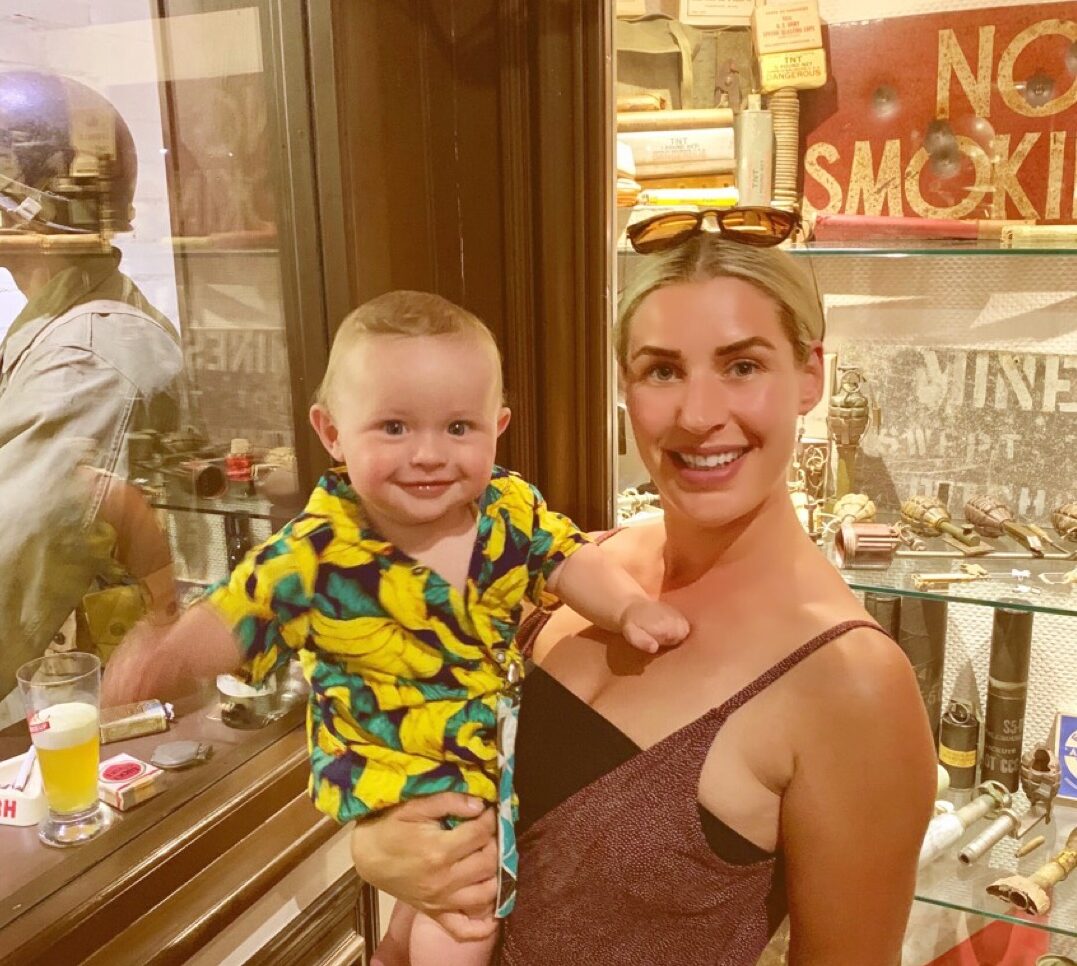 Renowned for its wartime efforts, the City is steeped in WW2 history. We travelled to Bastogne with a 7 month old baby in May. We wanted to learn more about the area and the impact the war had on its citizens. Every year thousands of veterans and family members flock to the area to commemorate the Battle of the Bulge.

Soldier are remembered as heroes and that is clear in the monuments and tributes throughout the small City. Visitors can spend their time strolling the cobbled streets or eating at one of several European cafes and Restaurants. Mainly tourism revolves around its WW2 history and if you like to talk to strangers, you will hear some fascinating stories from descendents of soldiers.

April to September is peak season because of the school holidays. Due to the really short flight, its a popular weekend city break destination with tourists. May is also very busy because of the Procession of the Holy Blood, one of the oldest and most solemn religious events in the world. You’ll have to secure your flight tickets early if you’re planning on visiting then as the prices will shoot up towards the event.

Spring is a fab time to visit as the cities aren’t crowded with tourists and the weather is mostly mild.  Autumn is the same as Spring. Colder weather but lower tourist rates, meaning you can grab cheaper flights to Belgium. And of course, you might want to visit their Christmas markets and ice skate on a frozen canal. Magical!

There are multiple factors that influence the price of a flight so comparing airlines, departure airports and times can help keep costs down. There is no direct flight to Bastogne, chose from Luxembourg (nearest), Brussels, Charleroi, Hahn or Cologne Bonn.

Currently, October is the cheapest month to fly to Brussels, with flights ranging from £90 to £95. April is the most popular month, where you will see a big jump up to an average cost of £120pp. We recommend using Skyscanner as a starting place and then searching other providers to see if you can beat their price.

Thursday is the most economical day to take a flight to Brussels. To get the best value, try booking a flight in the afternoon . Generally the prices will increase for flights at midday as these tend to have higher demand. If you’re visiting during a festival, make sure to book as early as you possibly can to avoid paying over the odds.

The currency in Bastogne is the Euro. Exchange rates vary, so be sure to check prior to your trip.The Bank of England has an extensive list that is updated every day. If you intend on using your credit charge, you may incur charges for payments and cash withdrawals. We often use the Post Office for our exchange or use ATM’s in our destinations.

POPULAR ON GEMMA AND GEORGE

Brussels Airport is an international airport 6.5 NM northeast of Brussels, the capital of Belgium. In 2019, more than 26 million passengers arrived or departed at Brussels Airport, making it the 24th busiest airport in Europe.

Luxembourg airport is nearest to Bastogne. Previously called Luxembourg Findel Airport due to its location at Findel, it is Luxembourg’s only international airport and is the only airport in the country with a paved runway.

If you hold a British Citizen passport, you don’t need a visa to enter Belgium. If you’re planning a stay of longer than 3 months, see our Living in Belgium guide and contact the Belgian Embassy if you have further questions. The rules on travel will stay the same until 31 December 2020.

We drove our own converted camper van from the UK to Switzerland and found the roads in excellent condition, well sign posted and easy to understand. There are specific rules that you must abide by when driving through Europe, it is up to you to find out what applies to your vehicle as you move across borders. Your drivers license must be valid and up to date, along with your car insurance.

The 101st Airborne Museum gives you a fascinating glimpse into the Siege of Bastogne, from the perspective of the units that took part in the Battle of the Bulge. Filled with personal memorabilia and items from that time, it’s a step back in time.

Explore four floors worth of weapons, equipment, uniforms, documents, photographs and civilian objects. In the basement, they have recreated a bombing scenario. Video footage followed by lights and noises, stimulates a bloody winter of 1944-45 as a resident of Bastogne in a bomb shelter. Children under 1 are not allowed to go into the basement.

The War Museum is a multilingual attraction. Guides are available in French, Dutch, English and German. Upon entry you watch a fascinating 30-minute film about the Ardennes Offensive in the winter of 1944-45. We lov

On your way through the gripping, multisensory galleries you’ll be led by four characters, an American soldier, a German soldier, a Bastogne schoolteacher and a local boy to understand the causes, course and consequences of the conflict from all angles.

In 2010, following a restoration project, this valuable piece of history from the Siege of Bastogne, became a WW2 interpretation centre. These are the barracks which held the Allied headquarters during the Ardennes Offensive, set up by General McAuliffe in December 1944.

Guided tours are led by retired soldiers and for 10 euros a ticket (pay at the gate) you will leave with a wealth of information. Delivered mostly in English, you learn about the battle of the bulge and about the brave servicemen and women. The big draw is towards the end where you enter a huge hangar-type building. It is loaded with tanks of various makes and models from several countries, mostly WWII models. The tour lasts around 2 and a half hours.

£77| Remembrance Tour: The Battle of the Bulge

Located alongside the Bastogne War Museum, the Mardasson Memorial commemorates the American soldiers wounded or killed during the Battle of the Bulge. In the shape of a five-pointed American star it rises to a height of 12 metres, with points 31 metres long and a central atrium 20 metres in diameter.

Lining the inside of the memorial are ten panels recounting the story of the Battle of the Bulge, and in the crypt are three altars one each for Catholic, Jewish and Protestant services, carved and decorated with mosaics by Fernand Léger. A spiral stairway lifts you to the roof of the monument to look over the Ardennes countryside, and study maps that explain the course of the battle in each direction.

Bastogne | Battle of the Bulge Private Day Tour from Lille

To commemorate the 50th anniversary of the Battle of the Bulge, 4,000 trees were planted in the pattern of the UNICEF logo, depicting a mother and child. These were planted at Bois de la Paix. The Trees, oaks and beeches were planted in tribute to the American veterans, Belgian combatants and all of the civilians and military personnel killed in the fighting.

At the centre of the wood, cities famously caught up in war are honoured with a panel and three trees. The American veterans who returned to Bastogne in 1994 were each invited to pick an individual tree, now permanently labelled with their names. You can walk and play in the woods. However, be mindful that they can get very busy later in the day with bus tours.

£77| Remembrance Tour: The Battle of the Bulge from Brussels

READ MORE: Things to do in Luxembourg with Kids

When walking around Bastogne you will notice a tank in the middle of the square. It was renamed after Anthony McAuliffe following the Second World War. And it is frequently visited by vistors and tourists as part of the Bastogne WW2 tours.

There’s a bust of the man on the square’s southern corner, before a preserved M4A3(75)W Sherman Tank “Barracuda”, from the 11th Armored Division. Also here is the last marker for the Liberty Road, a 1,146-kilometre commemorative way on the course of the Allied advance in 1944 following D-Day in June of that.

This museum located in the heart of Bastogne houses over 70,000 pieces. Ranging from religious art, legends and popular beliefs. A wide variety that will interest all ages and cultures. Especially for kids who like stories!

You can dive into the Ardennes many legends. Explore the ghost riders of the Wild Hunt. The Four Sons of Aymon and their magical horse, the wicked werewolf and many more. Entry is payable at the gates and they have toilets on site.

Animalaine is a family friendly, working museum that specialises in wool production and textiles. Here visitors learn how wool can be used and have a go themselves. With Bastogne being very War orientated, this can be a refreshing break from WW2 memorabilia. There are animals paddocks with sheep, rabbits and alpacas.

You can then learn about the methods for working wool. Comparing old techniques with modern machines. Before having a go yourself! There is also. Plus they have a really cool reconstructed period house for the kids to explore. And a playground and cafe with reasonable prices.

This Romanesque and Gothic church has been restored several times. Historically, they have proven that people used the building to worship, as far back as the 7th century. There are colourful murals on display, presenting scenes from the bible.

Inside there is also a 12th-century Romanesque baptism font and an 11th-century high altar. Records date the alter back to the 600s! You can also browse a selection of art. It doesn’t take long to look around and it’s free (albeit they ask for a small donation) but another nice break from WW2 history.

BATTLE OF THE BULGE GUIDED TOUR

If you avoid guided tours in large groups due to your children having a short attention pan (standard) hiring a private tour is a great solution. The guide will work with you, at a speed and routine that works best with your family. Choose from 1 days to 3. Henri Mignon was a 9 year old lad when the battle happened and has some mind blowing stories to share.

His knowledge is incredible and he really enjoys sharing his tales and answering questions. It’s important to him and to many tourists that the soldiers legacy and courage is not forgotten. Bastogne is a magnet for WW2 decendents, enthusiasts and historians. From all over the world. Be sure to strike up a conversation and learn more abut their reasons for visiting. 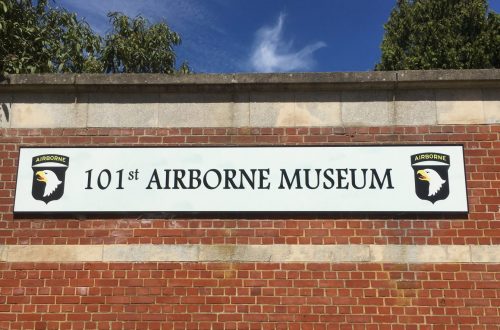 Hi! My name is Gemma, I’m a former journalist and first time Mum. I spent my maternity leave travelling the world with my fiancee and son, George. Here you will find practical travel information, tips and things to do with whilst on your adventures. From baby and beyond!